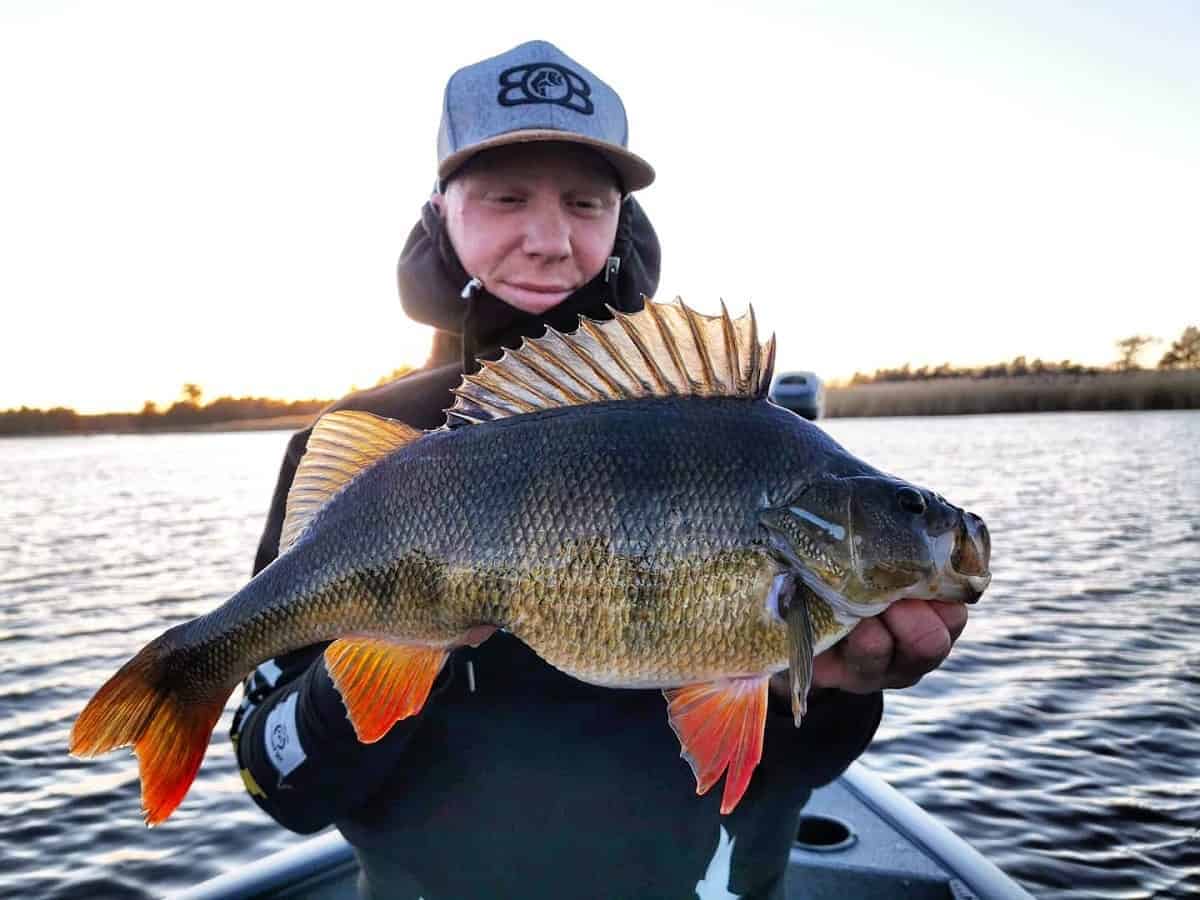 The perch is one of Europe’s most common and most popular freshwater fish. With its beautiful black stripes and spiny fins, it has the power to enchant the minds of millions of anglers. A perch that weighs more than 6 pounds is a trophy fish that many anglers can only dream of, as only a few are lucky enough to catch a perch of such a prodigious size. That is what makes this species so special!

The European Perch (Perca fluviatilis) is a predatory fish that lives in lakes and river systems all over Europe and Northern Asia. Perch have compact and deep bodies of a greenish color with black vertical bars, as well as very distinct spiny dorsal fins. This fish species can reach a weight of up to 7lb and a maximum length of 25 inches.

Continue reading this article if you want to find out everything about the small and popular predator that is the perch.

Major Features of The Perch

The perch has a rather short, compact and deep body shape. Juvenile fish are somewhat slimmer built than their adult counterparts and grown perch will develop a distinct hump between their heads and dorsal fins.

One exception when it comes to the perch’s fast and efficient movement is its excessive egg production during spring, which makes the fish extremely fat and rather slow moving.

Pre-spawning female perch are perhaps the roundest freshwater fish there are, as many of them produce so many eggs that they literally look like footballs.

When spawning, the females lay the eggs in a long ribbon-like structure that can be as long as 3 feet. These ribbons are commonly attached to underwater vegetation like weeds and reeds.

The perch is a green to dark-green colored fish that has a yellowish or whitish belly.

Black bars that look like thin, stretched triangles run vertically along its sides. It is these bars that so many people associate the perch with and the reason why many called it the “striped predator”.

The dorsal and pectoral fins of the perch are of a brownish or blackish color, whilst its remaining fins are of a very strong red color, especially in winter.

A beautiful exception is its tail fin, which is of an extraordinary mixture of red and black.

The combination of the perch’s fin and body colors makes this fish a highly picturesque one!

The perch’s mouth is rather small for a predator, which explains why perch only eat smaller prey fish.

The shape of the mouth is pointy and inside of it, there are bony jaws. Along the edges of its mouth, it has very small needle-like teeth. These teeth are however not sharp enough to cut through a fishing line.

Average Weight And Length of Perch

The average weight of the European perch is somewhere between 1 and 3 pounds. But as previously stated, its weight can differ immensely from venue to venue and from country to country.

Some lakes contain a perch population that will not exceed 1lb, while other lakes can contain populations of very large perch of over 4-5lb.

The perch’s average length is between 6 and 12 inches.

But similarly to its weight, the length of the perch can vary greatly as well. In some waters, they will be rather slim and long, reaching a length of close to 20 inches, while in other water systems, they can be built extremely deep and compact. In such venues, they may only reach a length of 15 inches.

Where to Find Perch

The perch is one of Europe’s most common and most popular freshwater species and can be found in virtually every lake or river system throughout the entire continent. It can thrive in both small ponds, big lakes, and large, slow to medium-flowing rivers.

As it is such a common fish to catch, for many people in Europe, the perch was the first fish they caught back when they were children, float fishing on a small pier in the middle of summer. Hence, the perch is often associated with fond childhood memories and nostalgia.

Huge perch populations can be found from the Northern parts of Scandinavia, central Europe, and down to the most Southern parts of Greece, Italy, and Spain.

The perch is also plentiful in the brackish waters of the Baltic Sea, along the coast lines of Sweden, Danmark, and Germany.

The European perch has also made its way into the Northern parts of Asia, populating large parts of Russia and spreading further eastward, via the region’s vast river systems.

As a result, it can be found throughout the northern parts of China, as well as in countries such as Georgia, Mongolia, and Kazakhstan. In the latter, a completely separate perch species, which is very similar to the European perch, can be found; the Balkhash perch (more on this species in the next section).

During the 19th century, the perch was widely introduced to Australia, New Zeeland, and South Africa as an angling species by European settlers.

There, they have largely remained to this day. In some water systems, they have caused substantial damage to native fish populations, which is why some governments have attempted to remove the species from these waters.

In New South Wales (Australia) for example, the perch is considered a noxious species. This is yet another example of how introducing completely new species to foreign water systems can be a very bad idea.

Are There Other Types of Perch?

Beside the European perch, there are two other common types of perch in the world. One is the yellow perch, which is home in North America. The other one is the Balkhash perch, which can be found in certain large lakes and rivers in Kazakhstan.

Beyond those major types, there are hundreds of subspecies scattered thorughout the world. However, this article focuses on the most commonly known perch species.

The yellow perch (Perca flavescens) is a species that is very similar to the European perch and that is native to the North American continent.

As the name suggests, this perch type is somewhat lighter and yellower than its European relative.

The yellow perch is also somewhat smaller than the European perch, with a maximum weight of around 3lb and a maximum length of 15 inches.

Nonetheless does it enjoy a high popularity among anglers in the U.S. and Canada, where it is a commonly fished and eaten target fish.

It can be found in the Arctic regions in the north and all the way down to southern Florida. It is also native to the Arctic and Atlantic ocean along the North American eastern coastline.

The Balkhash perch (Perca schrenkii) is very similar to the European perch, except for the fact that it is somewhat slimmer and lighter in color.

This third perch species can only be found in certain water systems in northern Asia. More specifically, the Balkhash perch is native to Lake Balkhash and Lake Alakol in Kazakhstan.

Its maximum length of 20 inches is basically the same as the European perch’s. On the contrary, the Balkhash perch’s maximum weight of about 4 lb is somewhat lower than that of the European type.

In its native regions, this perch is a very popular food source and angling trophy fish.

How to Fish for Perch?

Fishing with lures is probably the most common and popular way of fishing for perch.

Anglers who are using lures for perch usually have a varied arsenal of lures and baits with them. These can include the following:

In more recent times, a huge lure and bait market targeting perch fishermen has emerged, primarily in Europe. There are literally hundreds of lure types available and new models and ranges are added each and every year.

The fact remains that most lures will catch perch, regardless of current trends or market preferences.

Float fishing is definitely my favorite method of catching perch. Fishing a small predator float near a reed belt is something very special and literally gives me goosebumps as I write down these words!

Seeing that float disappear, striking and feeling that heavy resistance on the other end of the line is very hard to beat if you ask me!

These are the ost commonly used baits for perch on the float:

This is a great method for the colder months of the year. During spring and autumn, perch often stand closely packed near the lake or river bottom, which is why ledgering for them this time of year can be highly effective.

Most commonly, running rigs or paternoster rigs with a lighter weight of around 1 ounce are used for perch on the bottom.

When it comes to baits, the same kinds that are used for float fishing can be used when ledgering for perch.

Yet another very popular and effective method for perch is ice fishing for them. They can actually be rather active during the cold winter months, which can equal great fun and lots of catches during a day on the ice.

If you want to fish more actively, you can ice fish for perch using a small ice rod and vertical lures. If you prefer fishing passively and with several rods on the ice, you can use tip ups or short rods for using baitfish under the ice.

Of course, as the climate changes, this type of fishing may one day not be possible anymore.

The European perch grows very different from country to country, and even from venue to venue. On the British Isles, it is somewhat smaller than on the European mainland, where perch over 7lb have been caught and fish of about 10lb are rumored about.

The Netherlands and Spain especially are known for certain perch populations that include enormous specimens.

The British record perch is 6lb 3oz fish that was caught in the Wilstone Reservoir (Hertfordshire) in 2012 by fisherman Ken Brown.

The official world record perch is a mighty fish of 8lb 4oz that was caught in 2010 by angler Stephan Gockel in the Meuse River (Netherlands).

Can You Eat Perch?

You can most certainly eat perch. It is a commonly eaten fish in many parts of Europe and Asia, which is liked for its tasty meat and medium texture.

As it is rather bony, it is best prepared on the grill or in the oven, as this makes it easier to separate the meat from the bones.

A grilled summer perch wrapped in aluminum foil, with fresh herbs and some lemon juice on it is a very fine meal indeed and one that I associate with long, warm summer evenings with good friends.

With that said, I encourage you to check your local perch stocks and determine whether or not it’s a good idea to take home the fish. For a sustainable future population, catch&release is, as always, the best choice where perch numbers are declining. Thank you for your consideration concerning this matter!

Related Articles on Other Fish Species