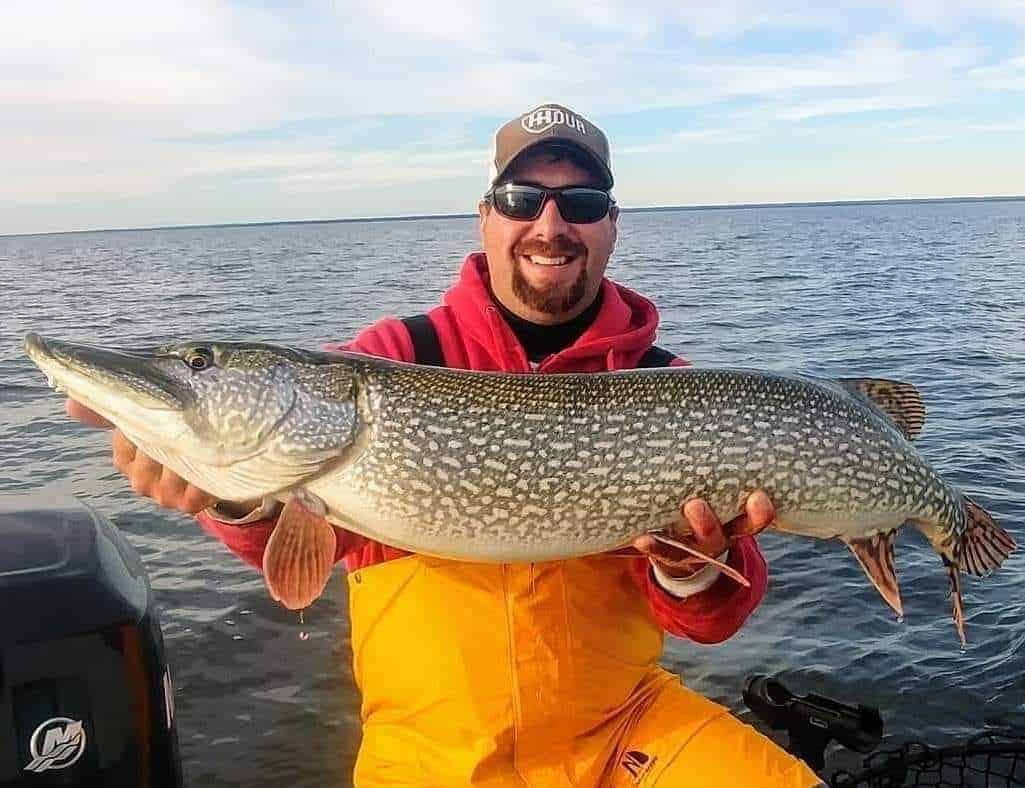 To the untrained eye, the pike and the musky can look like one and the same fish. But when taking a closer look, there are actually a lot of differences between those two predators.

Both pike and musky belong to the same family, the Esocidae, but are nonetheless two separate species, with the musky being the larger one of the two. Pike have light spots all over their dark, green bodies, while musky have dark spots or bars on a lighter body. Muskies have a sharply pointed tail, while pike have a more rounded one.

There are several other very distinctive differences when it comes to pike vs musky. Continue to read this article and find out what they are!

The following differences are sure ways of telling pike and musky apart, should you catch one or the other and have difficulties identifying your catch.

These are the most obvious visual differences between the two fish. The northern pike is most commonly olive green to dark green in color and has light to white bean-shaped spots all over its body. It is rare to catch a northern pike without any distinctive pattern of light spots.

Both species are rather large freshwater predators that can reach a length of over 50” and a weight of over 40lb. However, the musky can outgrow its distant relative the pike and generally also has a higher average weight and length.

Musky of over 60lb have been reported, which is a weight that has hitherto not been reached by any known pike in the world.

On the other hand, the musky is much lighter in color and often has dark to black spots or bars on its body and tail fin. It does happen that muskies without any distinctive markings are caught as well. Its main body coloration is light silver, green or brown.

An easy rule of thumb:

The pike’s patterns and spots usually also cover the back half of its head, including the gill covers, while the patterns and bars of the musky commonly do not cover the head, or only faintly so.

This is another very obvious difference between these two predators. Both pike and musky have rather large, forked tail shapes, but the musky’s tail, or caudal fin, is much sharper and pointier than the pike’s. On the contrary, the pike’s tail fin is rather well-rounded.

Another easy way of telling pike and musky apart is by counting the number of sensory pores along the underside of the lower jawline. These pores are small, easily detectable holes.

Pike only have a maximum of 6 pores on their lower jaw, but most commonly only 4 to 5. Muskies will have at least 7 pores on each side.

This will demand a closer look at your catch and can often take a little while, which is why it is important to handle the fish the right way, both for its and for your own sake. Try using an unhooking mat and pour some water over its head before you flip it around and check its lower jaw for pores. This will keep it oxygenated and calm.

You can also tell pike and musky apart by looking at their operculum, their gill cover.

This last difference is something that pike and musky anglers will know all too well. While the pike is a pretty easy predator to catch all year round and can basically be found anywhere in a lake or river system, the musky is a game fish that is much harder to lure. Hence its nickname “the fish of ten thousand casts”.

Anglers that catch muskies usually know their waters inside out and prefer trolling over casting from the shore. But even seasoned pros do not catch them on a regular and predictable basis.

It appears to be the musky’s unpredictable hunting and feeding behavior that makes this fish so hard to catch. Insidehook.com has even listed the musky as one of the 7 most hard-to-catch fish in the world.

As can be read in the next section, the fact that the musky is found only in certain regions of North America also makes it more difficult to catch this species.

Pike, on the other hand, can be caught fairly easily and regularly, both in shallow waters when casting from the shore, and in deeper ones when trolling.

You are also far more likely to catch more than one pike than musky during one and the same fishing trip. This fact could make the musky a more prestigious game fish than the pike, one could argue.

Distribution of Pike and Musky

The northern pike is found in 32 of the 50 U.S. states, from Alaska in the Northwest to Maine in the Northeast and all the way down south to the Northern parts of Texas, New Mexico, and Arizona. It can also be found in the upper Mississippi River.

There are large populations of pike in the Great Lakes region as well. Further up north from the Great Lakes, the pike is also native to Canadian territories, such as Alberta, Saskatchewan, Manitoba, Ontario, and Québec.

The musky can be found mostly in the Great Lakes area and its surrounding lakes and river systems in the states of Minnesota, Wisconsin, and Michigan. Although there are also smaller populations of them further down south in the Tennessee River Valley, in the Broad River in South Carolina and in the Red River drainage of the Hudson Bay basin.

The musky is also found in and around the St Lawrence River and throughout Ontario in Canada.

Mysteriously, the musky has never left the North American territories and can only be found in the Northern parts of the U.S. and the Southern parts of Canada.

The pike can instead be found all over the Northern hemisphere, from North America, Russia, Asia, and all over Europe. They have also been introduced to lakes in Northern Africa.

Pike are also found in the brackish waters of the Baltic Sea, which is quite a unique phenomenon, as they are otherwise not found in saltwater.

If you want to read about the Baltic Sea’s pike and how to fish for it, you should also check out this article I wrote: How to Fish for Saltwater Pike (A Complete Guide)

Can Pike and Musky Live Together?

As stated above, both musky and pike are found in large numbers in the Great Lakes, which implies that they indeed can coexist and live together in the same water system.

Examples of such shared habitats are the St Lawrence River, Lake Wabigoon, Leech Lake and Eagle Lake. Here, strong and large populations of both pike and musky can be observed and anglers catch massive specimens of both species in these waters.

Hence, coexistence does not seem to be an issue for these two predators, maybe also because it occurs mainly in larger lake or river systems with enough prey fish to sustain both populations.

Two reasons why many waters do not contain both pike and musky have instead to do with the size and temperature of a water.

Musky seem to stick to medium to large sized rivers and lakes, whilst pike can be found in all types and sizes of lakes and rivers, from extremely shallow and small to very large.

When it comes to water temperature, the northern pike prefers cooler temperatures, while the musky is far less tolerant of too cold water. This would explain why they can be found in larger and deeper lakes and rivers that have somewhat warmer temperatures during winter, and why their distribution is limited to certain regions of North America.

How Do You Catch Pike and Musky?

Pike and musky can be caught using roughly the same fishing techniques, lures, and baits. Their bodies are highly advanced and evolved torpedo-shaped hunting machines that are capable of fast-start movements and very fast swimming. They are freshwater predators that have to be targeted accordingly.

Of course, there are some really fine nuances found here as well!

For one thing, pike will usually go for a lure or bait directly and won’t make any fuss biting and swallowing the prey. Musky on the other hand are known to follow, chase, and test presented lures or baits before eventually deciding (or not) to go for it.

For another thing, as previously stated, it’s often harder to cast for musky from the shore, and easier to catch them trolling from a boat. On the contrary, pike can be found and caught practically anywhere in any given water; behind a large rock in shallow water that is only 1 foot deep, or in the middle of a lake in open and very deep water. This, of course, makes the pike much easier to catch.

When it comes to tackle, lures and baits, the following are useful tips for both predators:

What’s The Biggest Pike Ever Caught?

The officially recognized world record pike was caught in 1986 by the German angler Lothar Louis on the Greffern Lake. This pike weighed in at an unbelievable 55lb 1oz, which is really big, even for the somewhat larger European pike.

The biggest pike in the U.S. is a fish of 46lb 2oz which was caught by fisherman Peter Dubuc back in 1946 on Sacandaga Lake in the state of New York.

What’s The Biggest Musky Ever Caught?

The official musky world record is a monstrous fish of 67lb 8oz. It was caught in 1949 in Lake Court Oreilles, Wisconsin, by the experienced angler and outdoor writer Carl Johnson.

Although larger specimens have been reportedly caught since then, Johnson’s musky remains the official world record, as it had been both caught and documented according to the IGFA’s International Angling Rules, which are the internationally known and accepted rules of sport fishing.

If you want to learn more about the northern pike, you should also check out these articles: